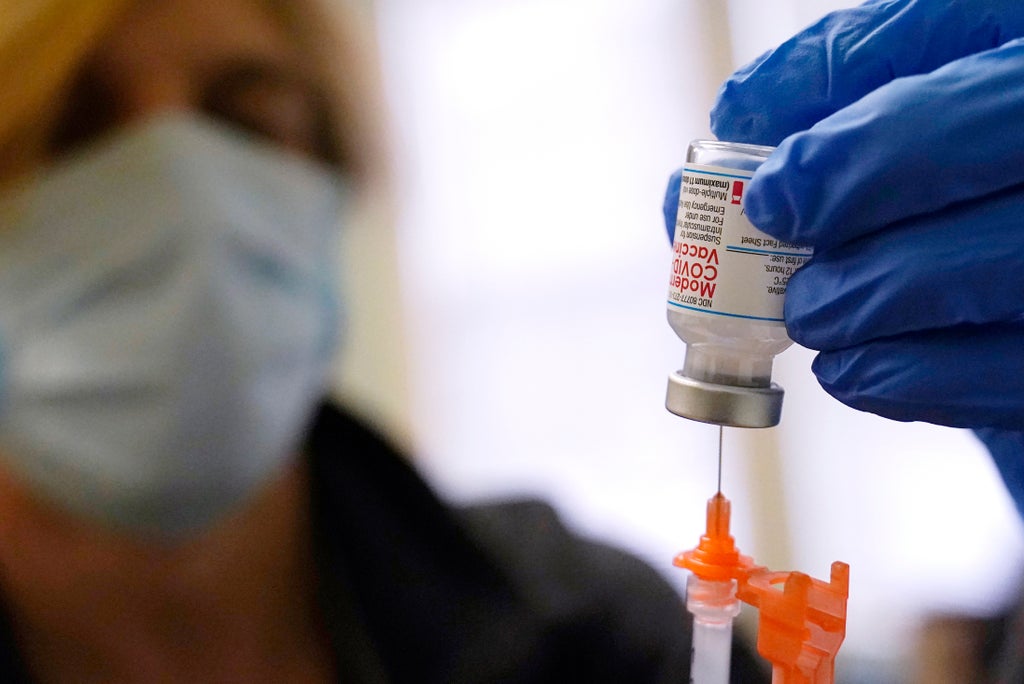 The Supreme Court has tossed out a Biden administration vaccine mandate that would have required 80 million workers to either get vaccinated or submit to regular testing.

In a blow to the president’s push to get more Americans vaccinated, the ruling comes as health experts believe that the US may be approaching the peak of the latest wave of Covid-19 brought on by the highly contagious Omicron variant.

Meanwhile, Dr Anthony Fauci has defended remarks made during a recent hearing of the Senate Committee on Health, Education, Labor, and Pensions.

The National Institute of Allergy and Infectious Diseases director was heard calling Senator Roger Marshall “a moron” when the senator questioned if he should have a publicly available financial disclosure form on Tuesday.

Dr Fauci told MSNBC on Wednesday that he was stunned to know “that a sitting United States senator doesn’t realise that my financial statement is public knowledge”.

The infectious diseases expert also clashed with Senator Rand Paul during the hearing, who he accused of politicising the pandemic and “kindling the crazies” with his remarks. Dr Paul has since doubled down on his remarks.

President Joe Biden announced on Thursday that the federal government will be sending medical teams to six states to help with Covid-19 care where hospitals and healthcare systems have been overwhelmed by the spread of the Omicron variant.

The teams will support the healthcare systems in major hospitals in the states.

A defence official said that more than 40 medical teams from the Army, Air Force and Navy that include a total of 1,000 active duty military medical personnel are available.

Teams will continue to be mobilized and deployed where they are needed in the coming weeks.

A White House official says that this is a “first wave of deployments,” and other teams will also be sent to areas where they’re needed.

US Surgeon General Dr. Vivek Murthy has said that the Supreme Court’s decision to block a nationwide vaccine and testing mandate for large businesses, is “disappointing.”

Speaking to CNN’s Wolf Blitzer, Dr Murthy said, “As a doctor and a public health professional today’s news was disappointing.”

“We know that the requirements for vaccines in workplaces are an important part of how we can keep workplaces safer, for both workers as well as for customers.”

He added that as the US records surging cases driven by the Omicron variant, the next few weeks will remain challenging.

“I think the next few weeks are going to be challenging. We are going to continue to see high numbers of cases. Our hospital systems in parts of the country are strained and that will continue,” he said.

The Supreme Court voted 6-3 to toss out Joe Biden’s mandate for businesses requiring those with more than 100 workers to institute vaccination or regular testing requirements on Thursday.

As the US fights to slow the spread of Covid-19’s Omicron variant, reports have surfaced that the Centers for Disease Control and Prevention (CDC) is considering recommending that those who can should wear a higher standard of mask when in public – specifically the KN95 and N95 masks that have been in high demand for the last two years.

President Joe Biden said his administration will unveil a plan to provide free masks to Americans, to encourage their use in order to stem the spread of Covid-19.

Mr Biden also said on Thursday that his administration will order another half-billion at-home Covid-19 tests for mailing to any American who requests one on a yet-to-be unveiled website, adding to a previous order of 500 million placed by the administration last month.

ABC News is under fire for its editing of a “Good Morning America” interview with CDC Director Rochelle Walensky that created uncertainty that’s being exploited by vaccine critics.

The CEO of United Airlines has told his staff in an open letter that the company’s vaccine mandate has ended the “weekly” deaths that previously plagued the organisation.

Ruling does not prevent employers from requiring vaccination

The Scotus ruling does not prevent private employers from requiring vaccination, nor does it undermine existing workplace vaccination requirements that were put in place voluntarily by employers.

The White House will continue to encourage private employers to institute their own mandates.

NBC News reports that the number of Covid-19 cases in the US has now topped 63 million since the start of the pandemic.

There were 1 million new cases in 24 hours from the highly transmissible Omicron variant.

Before mandates there were incentives

Before the White House introduced vaccine mandates in the late summer of 2021, the vaccine had been available for almost nine months.

To encourage take-up, a number of incentive schemes around the country received White House support.