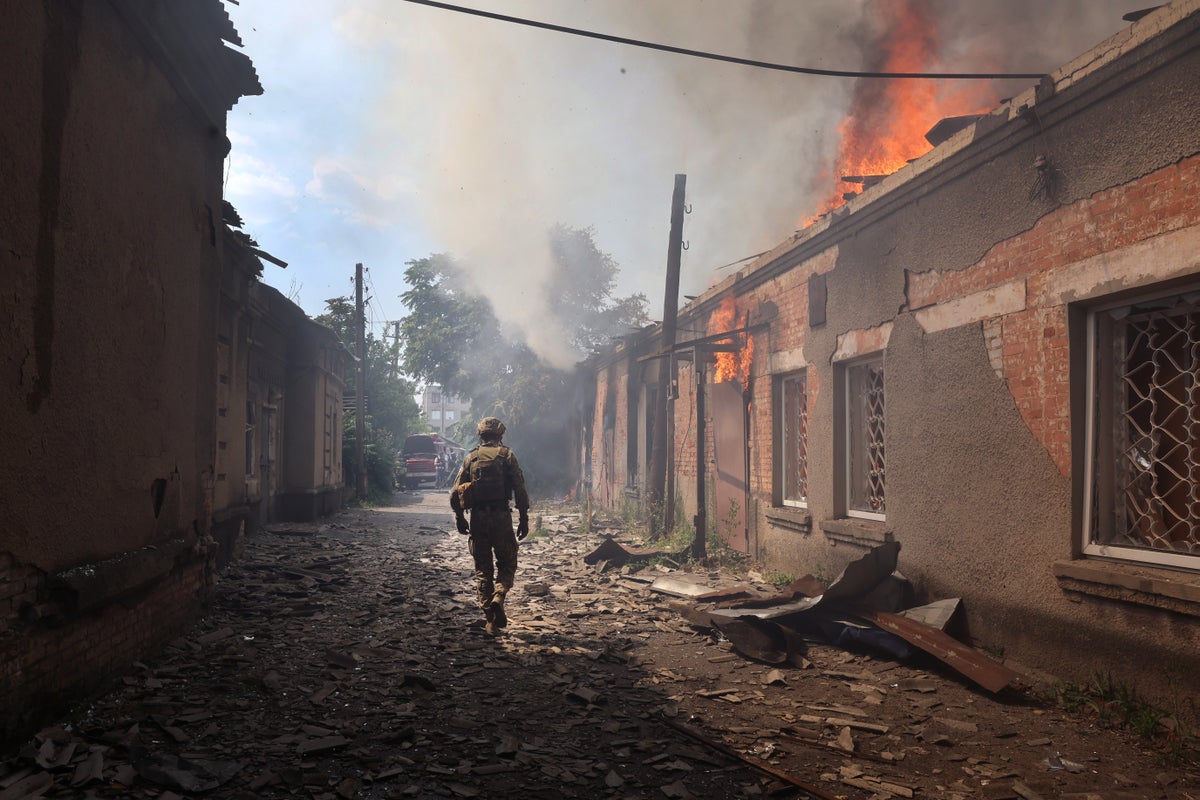 Russia will “almost certainly” shift its focus to capturing Donetsk Oblast now that Ukrainian troops have withdrawn from Luhansk, the UK Ministry of Defence has said.

The Ministry added that the fight for the Donbas “has been grinding and attritional and this is highly unlikely to change in the coming weeks”.

Volodymyr Zelensky confirmed Ukrainian fighters left the last major city in Luhansk but said his troops will return and regain the control of territory with the help of modern weapons.

Mr Zelensky said in an address last night: “If the command of our army withdraws people from certain points of the front where the enemy has the greatest fire superiority, in particular this applies to Lysychansk, it means only one thing: we will return thanks to our tactics, thanks to the increase in the supply of modern weapons.

“And when someone over there in Moscow reports something about the Luhansk region – let them remember their reports and promises before February 24, in the first days of this invasion, in the spring and now.”

Swiss NGO calls out government as it hosts meeting on Ukraine

A leading Swiss nongovernmental group on Monday called out Switzerland as a “safe haven” for Russian oligarchs and as a trading hub for Russian oil, grain and coal.

Public Eye called on the Swiss executive branch to “use all levers at its disposal to stop the financing of this inhuman aggression,” a reference to Russian President Vladimir Putin’s war in Ukraine that has killed untold thousands of people, driven millions from their homes and rippled through world economy by driving up food and fuel prices.

It spoke out on the day that the Swiss president was due to host a conference on Ukraine‘s eventual recovery from Russia‘s war involving government officials, advocacy groups and U.N. institutions.

In an exclusive interview with Reuters, Pope Francis said he would like to go to Ukraine and “wanted to go to Moscow first”.

He said: “We exchanged messages about this because I thought that if the president of Russia gave me a tiny window, I would go there to serve the cause of peace …. And now it’s possible, after I come back from Canada; it is possible that I manage to go to Ukraine.

“The first thing is to go to Russia to try to help in some way, but I would like to go to both capitals.”

He added: “(With Russia) there is still that very open dialogue, very cordial, very diplomatic in the positive sense of the word, but for the moment it’s OK; the door is open.”

Putin will not congratulate Biden on July 4, Kremlin says

“Congratulations this year can hardly be considered appropriate,” Kremlin spokesperson Dmitry Peskov told reporters on a conference call. “The United States’ unfriendly policies are the reason.”

Russian cosmonauts aboard the International Space Station on Monday celebrated Russia‘s capture of the eastern Ukrainian region of Luhansk, a significant milestone for Moscow in the war.

Roscosmos, the Russian space agency, described Moscow’s capture of the Luhansk region as “a liberation day to celebrate both on Earth and in space.”

“This is a long-awaited day that the residents of the occupied areas of the Luhansk region had been waiting eight years for,” Roscosmos wrote on the Telegram messaging app.

“We are convinced that July 3, 2022, will forever remain in the history of the (Luhansk People’s) Republic.”

Russia announced on Sunday that Russian and separatist forces had gained full control over the Luhansk region after capturing its last major city, Lysychansk.

Ukraine, which has vowed to regain the lost territory, said its troops had withdrawn from their last remaining bastion in the region to save the lives of its soldiers. Kyiv said its troops would regroup to launch a counter-offensive with the help of long-range Western weapons.

After being repelled in its initial attempt to capture the capital Kyiv in February, Russia has focused on driving Ukrainian forces out of the eastern Luhansk and Donetsk regions where Moscow-backed separatists have been fighting Kyiv since Russia‘s first military intervention in Ukraine in 2014.

Western ambassadors in China sound off over Russia in rare forum

Western envoys in China criticised Russia on Monday for its invasion of Ukraine, with the U.S. ambassador saying China should not spread Russian “propaganda”, in an unusual public forum in a country that has declined to condemn Moscow’s attack.

“I hope foreign ministry spokespersons would also stop telling lies about American bioweapons labs, which do not exist in Ukraine,” he said.

Burns was flanked by the British and French ambassadors to his left and a Chinese government adviser and the Russian ambassador to his right. The forum organiser had billed the session as a discussion among representatives of the five permanent members of the U.N. Security Council.

While the session was on the broad topic of “The United Nations and Global Order”, all three Western ambassadors criticised Russia for what they called its illegal aggression against Ukraine, a characterisation rejected by Russian ambassador Andrey Denisov.

British ambassador Caroline Wilson told the audience, made up of foreign diplomats, Chinese students and academics: “If Russia has its way, we would have global anarchy”.

Anthony Albanese wrote in a Twitter post today: “My visit to Ukraine sends a clear message that democratic nations like Australia will stand with the Ukrainian people in their time of need.”

Ukraine claims Russian military base has been hit

Ukraine said its air force had flown some 15 sorties “in virtually all directions of hostilities”, destroying equipment and two ammunition depots.

In the Russian-occupied southern Ukrainian city of Melitopol, Ukrainian forces hit a military logistics base with more than 30 strikes on Sunday, the city’s exiled mayor Ivan Fedorov said. A Russian-installed official confirmed that strikes had hit the city.

Reuters could not independently verify the battlefield reports.

Russia will shift the main focus of its war in Ukraine to trying to seize all of the Donetsk region after capturing neighbouring Luhansk, the Luhansk region’s governor said on Monday.

Governor Serhiy Gaidai told Reuters in an interview that he expected the city of Sloviansk and the town of Bakhmut in particular to come under attack as Russia tries to take full control of what is known as the Donbas in eastern Ukraine.

Russia says it has established full control over the Luhansk region following a withdrawal by Ukrainian forces from the bombed-out city of Lysychansk.

“In terms of the military, it is bad to leave positions, but there is nothing critical (in the loss of Lysychansk). We need to win the war, not the battle for Lysychansk,” Gaidai said.

He said the withdrawal from Lysychansk had been “centralised”, indicating that it had been planned and orderly, but that Ukrainian forces had risked being surrounded.

“Still, for them (Russian forces) goal number 1 is the Donetsk region. Sloviansk and Bakhmut will come under attack – Bakhmut has already started being shelled very hard,” he said.

The Kyiv Independent has reported that on July 3, six civilians were killed in Sloviansk, one in Avdiivka, one in Bakhmut, and one in Zaitseve, according to the Donetsk Oblast Governor Pavlo Kyrylenko.

Among those killed, two are children.

Russia‘s defence ministry also said on Sunday it had struck the military infrastructure of Kharkiv, Ukraine‘s second-largest city in the northeast, where a Reuters reporter said Ukrainian forces had been building fortifications after nightly shelling.

Outside a school in Kharkiv, some residents threw debris into a large crater created by an early morning rocket strike while others got help repairing damaged houses.

“The wife was lucky that she woke up early in the morning because the roof fell exactly where she had been sleeping,” one resident, Oleksii Mihulin, told Reuters.

About 70 km (44 miles) from Kharkiv on the Russian side of the border, Russia also reported explosions on Sunday in Belgorod, which it said killed at least three people and destroyed homes.

“The sound was so strong that I jumped up, I woke up, got very scared and started screaming,” a Belgorod resident told Reuters, adding the blasts occurred around 3 a.m. (0000 GMT).

Moscow has accused Kyiv of numerous attacks on Belgorod and other areas bordering Ukraine. Kyiv has never claimed responsibility for any of these incidents.