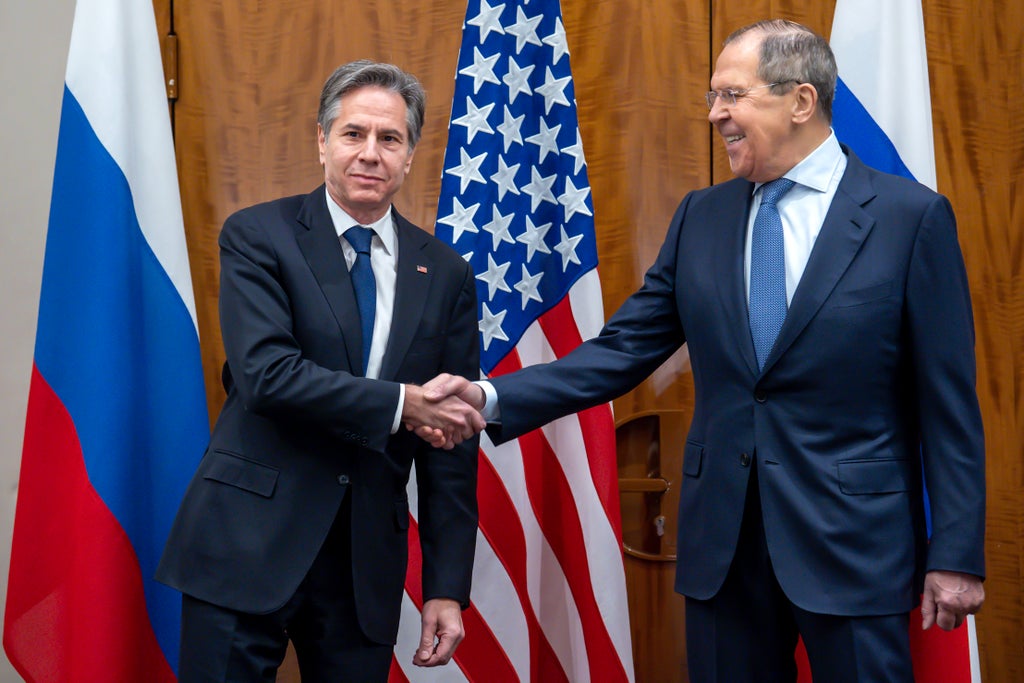 Russia has bolstered its military deployment on the border with Ukraine in recent weeks with Moscow’s military power now consisting of 106,000 troops, according to western and Ukrainian officials.

Fears that Russian president Vladimir Putin will decide to invade eastern Ukraine have been growing as Moscow is attempting to build pressure on the US and West to promise that Kyiv will not join its Nato defensive alliance.

Russia has repeatedly dismissed the allegation by Kyiv that it would invade the country and denies a military build-up.

The US and UK on Thursday renewed warnings to Mr Putin against any attempt to invade Ukraine.

The US Secretary of State Antony Blinken is set to meet with Russian foreign minister Sergei Lavrov in Geneva today with the goal of achieving a “diplomatic off-ramp” to ease tensions, according to State Department officials.

Russian foreign minister Sergei Lavrov echoed Antony Blinken’s remarks that Moscow did not “expect a breakthrough at these negotiations either”.

But what Russia expects is “concrete answers to our concrete proposals”, he said.

Moscow has demanded a written answer to their proposal calling for concessions from Nato over the western alliance’s relationship with Ukraine, a former Soviet republic.

The Russian Foreign Ministry on Thursday laid out its planned agenda for the meeting: texts of two proposals by Moscow for new treaties with both the United States and Nato on security guarantees.

In his opening statement for highly anticipated talks in Geneva with Russian foreign minister Sergei Lavrov, US Secretary of state Antony Blinken said Washington does not expect to resolve its differences with Russia over Ukraine at talks in Geneva on Friday.

“This is a critical moment. You’re right: We don’t expect to resolve our differences here today,” Mr Blinken.

“But I do hope and expect that we can test whether the path of diplomacy, of dialogue, remains open. We’re committed to walking that path, to resolving our differences peacefully and I hope to test that proposition today,” Mr Blinken added.

Russia ‘not afraid of US’, deputy foreign minister says

Russian deputy foreign minister Sergei Ryabkov said on Friday that Russia is not “afraid of anyone, even not of the US”.

His response came in response to CBS News’s questions which asked if Russia was intimidated by Ukraine.Mr Ryabkob arrived in Geneva on Friday for a meeting with top US diplomats, including US secretary of state Antony Blinken.

Ahead of the highly anticipated meeting, the Kremlin said Mr Blinken and Russian foreign minister Sergei Lavrov are meeting to take stock of the talks so far over the Ukraine situation and Russian officials are not expecting the US to hand over the formal reply to Russia’s proposal yet.

Moscow has sought a written reply from Washington to its demands on security guarantees.

Joe Biden has said he thinks Russia will make a move on Ukraine, warning Moscow it would face a “stiff price” for an attack yet suggesting that a “minor incursion” might be treated differently by the US and its allies.

The US president’s comments at a White House news conference on Wednesday injected uncertainty into how the West would respond should Russian President Vladimir Putin order an invasion of Ukraine.

“Let’s give dialogue a chance. That is what Spain is pushing for. If dialogue does not bear fruit, of course, Spain will stand with its European partners and its Nato allies united in deterrence,” he said on Friday in Madrid.

His statement came as Spain has sent warships to join Nato naval forces in the Mediterranean and the Black Sea, defence minister Margarita Robles said.

Ukraine’s military intelligence on Friday said Moscow has been actively recruiting mercenaries and sending weapons to the restive, separatist-controlled areas of eastern Ukraine.

In a statement, the country’s military intelligence agency said Russia was sending mercenaries for intensive training in the area.

It added that weapons including several tanks, artillery, mortars as well as fuel had been secretly taken to the area from Russia.

Amid growing fears of Russia invading Ukraine, the US secretary of state and Russian foreign minister are set to hold urgent talks in Geneva on Friday.

Antony Blinken arrived in Geneva for talks with Russian minister Sergei Lavrov after a swing through Europe to shore up support from US allies for possible sanctions in case of a full-scale invasion.

Mr Blinken held discussions in Berlin with top diplomats of Britain, France and Germany and raised fears that Mr Putin could order an invasion imminently.

He suggested that the possible incursion will “drag us all back to a much more dangerous and unstable time, when this continent, and this city, were divided in two… with the threat of all-out war hanging over everyone’s heads”.

Good morning and welcome to The Independent’s live coverage of the ongoing crisis between Russia and Ukraine.