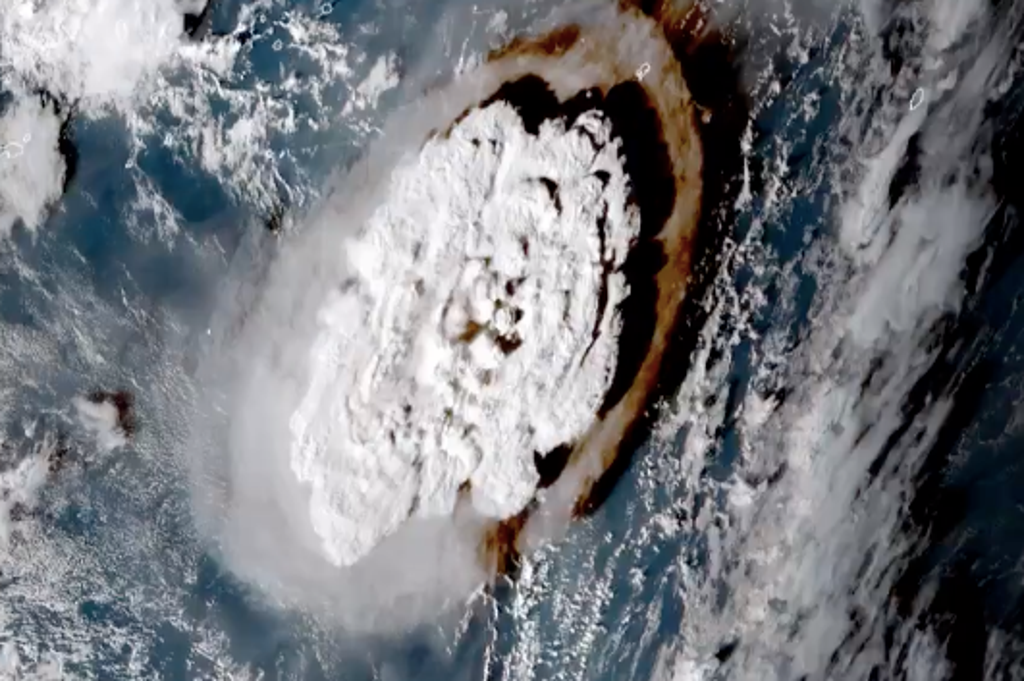 The tsunami threat receded around the Pacific on Sunday even as Tonga remained entirely cut off due to a massive undersea volcanic eruption on Saturday.

The tsunami that was generated, left the Pacific Island nation largely uncontactable, with electricity, the internet, and telephone lines severed.

The Pacific Tsunami Warning Centre (PTWC) on Sunday said the threat had receded but coastal areas should remain alert.

The US and Japan earlier warned people to move away from coastal areas. There was no update on any casualties in Tonga as even government websites were not updated.

Reports said that beyond the capital Nuku’alofa, no contact has been established in any coastal areas.

On Sunday, New Zealand prime minister Jacinda Ardern said that the capital Nuku’alofa is covered in thick plumes of volcanic dust but otherwise “conditions are calm and stable.”

Ms Ardern said: “We have not yet received news from other coastal areas.”

On Saturday, the eruption of Hunga-Tonga-Hunga-Ha’apai — a volcano that has been erupting regularly over the past few decades — was so loud that residents in far away Fiji and New Zealand said they heard it.

Satellite images showed plumes of ash and dust over Tonga and the smoke was about 12 miles above the sea level.

Thousands of people with families in Tonga remained concerned about the situation in the remote island nation.

“We pray God will help our country at this sad moment. We hope everybody is safe,” Maikeli Atiola, the Secretary of the Wesleyan Church of Tonga in Auckland said, Radio New Zealand reported.

Ms Ardern said that the main undersea communications cable was impacted and that in some areas in the island power has been restored.

Even though official figures were not available, according to the New Zealand high commission, in Tonga’s capital boats, shops and other infrastructure has been damaged in the tsunami.

Tonga’s cabinet also held an emergency crisis meeting on Sunday. It was reported by Reuters that Australia is sending a P8 surveillance aircraft to Tonga on Monday to help assess the damage.

Several people in Fiji and other islands said that they could feel their houses shaking.

The Associated Press quoted Sanya Ruggiero, a consulting communications advisor based in Suva, the capital of Fiji, some 750 kms from Tonga, as saying: “My entire house was shaking. My doors, windows were all rattling like hell. And mine was not even as bad as others. Hundreds of people ran out of their homes.”

“This is the worst disaster Tonga has had in living memory and the recovery from this is going to take years,” Ms Ruggiero said.

Experts said the ash from the undersea volcanic eruption could contaminate water resources and might cause respiratory illnesses.

“Help will be needed to restore drinking water supplies. People of Tonga must also remain vigilant for further eruptions and especially tsunami with short notice and should avoid low lying areas,” Shane Cronin, professor at the School of Environment, University of Auckland was quoted as saying by the associated press.