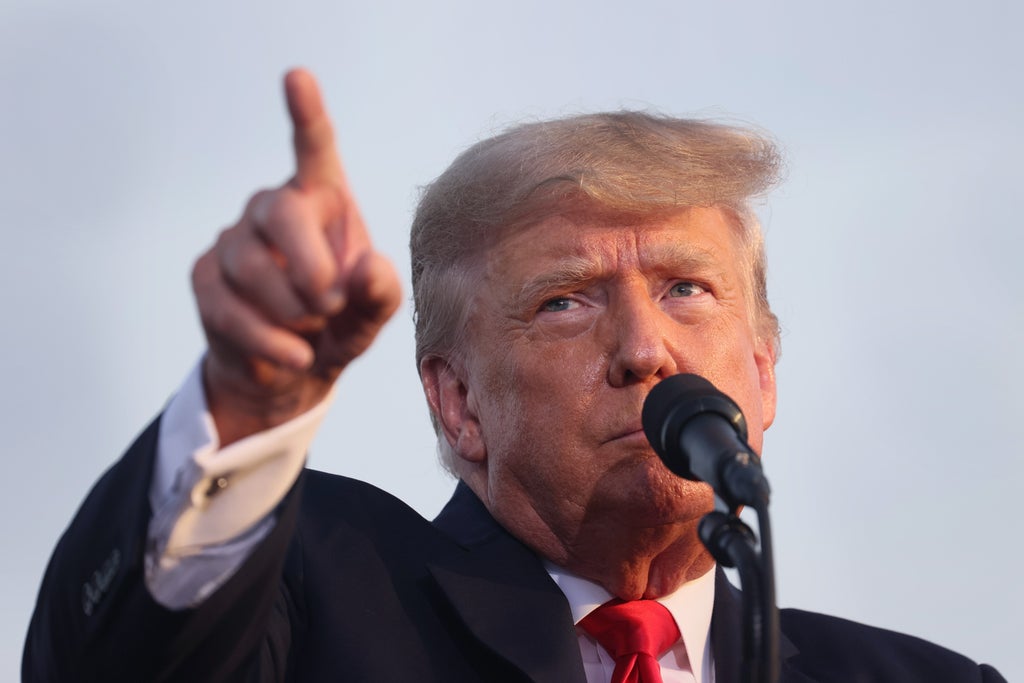 The House select committee investigating the 6 January insurrection has requested “voluntary cooperation” from House Republican Leader Kevin McCarthy to provide information about his conversations with former president Donald Trump during the worst attack on the Capitol since 1814.

However, McCarthy has refused to cooperate with the committee, citing the “illegitimate” investigation by the panel, in a statement hours after the request.

This came as Trump grabbed headlines for hanging up on an NPR journalist who challenged him questions about the Capitol insurrection and his fixation on non-existent election fraud in 2020.

The ex-president is facing further pressure from the select committee investigating the events of 6 January 2021, with the panel issuing subpoenas to a former White House speechwriter and aides to Donald Trump Jr. So far, many White House and Trump associates have refused to comply with the panel’s demands, but many others are thought to have given evidence in private and handed over relevant documents.

MyPillow CEO and Trump supporter Mike Lindell has made perhaps his most outlandish claim about the 2020 election yet – that he has enough evidence to lock up nearly the entire US population for voter fraud.

My colleague Josh Marcus has more below:

Republican senators rallied to the defence of Sen Mike Rounds this week after he was attacked by former President Donald Trump.

Mr Rounds sparked a feud with the former president when he went on ABC’s This Week on Sunday and reiterated that he did not believe conspiracy theories supported by Mr Trump and his allies about the 2020 election, namely the assertion that Mr Trump had in fact won the election.

ICYMI: Trump’s NPR interview proved he’s a shadow of his former self

The former president accidentally said the quiet part out loud and came across as overwhelmingly fragile, writes Holly Baxter.

As pressure continues to mount on former president Donald Trump, his successor, Joe Biden, along with other Western leaders were lambasted by Human Rights Watch on Thursday.

The criticism came over the countries’ weak defense of democracy and for failing to meet challenges from the climate crisis and Covid-19 pandemic to poverty, inequality and racial injustice.

Human Rights Executive Director Kenneth Roth said Biden took office in January 2021 with a pledge to put human rights at the center of his foreign policy, in contrast to what he described as former US president Donald Trump’s “embrace of friendly autocrats”.

“But he continued to sell arms to Egypt, Saudi Arabia, the United Arab Emirates, and Israel despite their persistent repression,” Roth wrote in Human Rights Watch’s annual World Report, released on Thursday.

Biden was also critised for seeming to “lose his voice when it came to public denunciation of serious human rights violations” during summits.

“If democracies are to prevail in the global contest with autocracy, their leaders must do more than spotlight the autocrats’ inevitable shortcomings. They need to make a stronger, positive case for democratic rule,” Roth said.

The appearance was virtual and had been “going on all day”, the panel’s chairman Bennie Thompson told CBS News on Wednesday.

The Fox News host was serving as a top spokesperson for then-president Donald Trump and was an adviser to the Trump 2020 campaign.

She was subpoenaed in November by the committee, asking her to turn over any related records and appear for deposition.

The subpoena expressed interest in speaking with her based on her public statements pushing the former president’s baseless voter fraud claims and noted that her comments contributed to public distrust in the election and fueled insurrection.

The panel also noted that she was with Trump on 6 January when he travelled to Ellipse and delivered the incendiary speech to “fight like hell” and “stop the steal”.

The committee has so far issued 85 subpoenas to Trump allies, former White House officials and individuals who are suspected to be involved in planning of the rally before riots broke out at the Capitol.

Michael Cohen announced on Thursday that Donald Trump was served legal papers for a new lawsuit against him and other members of the Trump administration for allegedly violating his right to free speech and placing him in solitary confinement for two weeks.

Tweeting on Thursday, former Trump lawyer said the “case progresses and the guilty will not go unpunished”.

In the lawsuit, Cohen, who was once Mr Trump’s private lawyer, claimed that federal authorities forced him into 16 harrowing days in solitary confinement where he suffered shortness of breath, severe headaches and anxiety inside a small cell.

It was after he threatened to leak damning information about Trump.

Kyle “Based Stickman” Chapman, who is infamous for attacking counter-protesters with a stick during a Donald Trump rally, has been arrested for allegedly attacking a health care worker in Idaho, reported the Daily Beast.

He was arrested on Tuesday after a local hospital called police to report battery on a worker, a felony in Idaho, Boise Police spokesperson Haley Williams said.

During his arraignment, the next day, the former leader of the right-wing group said he was being treated in the hospital for pneumonia. But Chapman allegedly grabbed a hospital employee and became verbally abusive when they went there to fix a device.

Chapman was on probation until 17 July from a Texas case for giving a man a brain haemorrhage and he might have violated his probation terms by attacking the worker.

Former President Donald Trump proved his ability to dominate the attention of the US political sphere this week with a pair of interviews given to National Public Radio (NPR) and One America News, a right-wing broadcaster.

In the two interviews, Mr Trump went after his opponents both directly and indirectly; he called Senate Minority Leader Mitch McConnell a “loser”, a Republican senator who denied his false claims about 2020 “crazy”, and took a shot at politicians (clearly referring to Florida Gov Ron DeSantis, a 2024 rival) who refuse to share their vaccination status as “gutless”.

Andrew Naughtie reports on the NPR interview that was cut short after the host questioned him repeatedly on his false claims about 2020:

House Republican Leader Kevin McCarthy has refused to cooperate with the House select committee investigating the 6 January insurrection, citing the “illegitimate” investigation by the panel.

In a statement released hours after the committee sent a formal request to him for an interview, McCarthy said that the “illegitimate” panel was trying to interview him about his “private conversations not remotely related to the violence that unfolded at the Capitol.”

“The committee’s only objective is to attempt to damage its political opponents,” he said.

“It is with neither regret nor satisfaction that I have concluded to not participate with this select committee’s abuse of power that stains this institution today and will harm it going forward.”

The panel requested “voluntary cooperation” after noting that he had previously acknowledged having at least one telephone conversation with Donald Trump while a mob of his supporters was storming the Capitol in hopes of stopping Congress from certifying President Joe Biden’s 2020 electoral college victory.