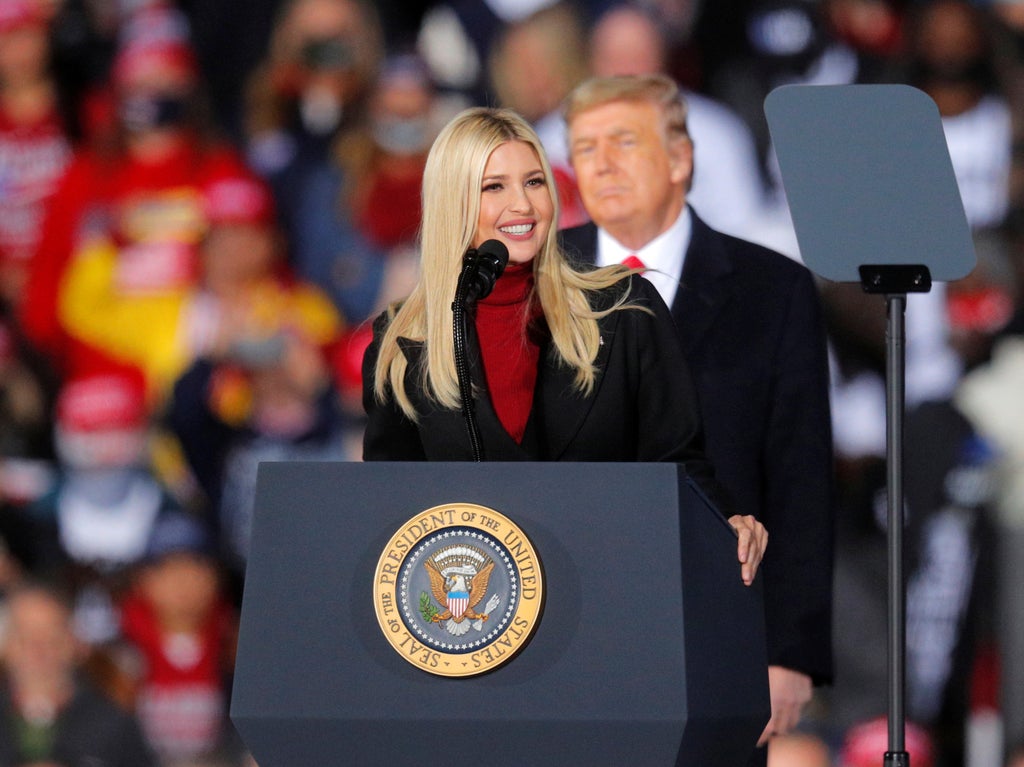 Former President Donald Trump has defended his “perfect” phone call with Georgia officials regarding election fraud in the state. Earlier on Thursday, the Fulton County district attorney requested a special grand jury as part of the investigation into Mr Trump’s interference in the 2020 election results.

Meanwhile, Ivanka Trump, his eldest daughter and one-time White House adviser, has been invited to meet with the House select committee investigating the January 6 Capitol riot.

In a public letter that reveals some of the information that the committee has gathered to date, chair Bennie Thompson said they would like to question Ms Trump on her knowledge of various White House conversations relating to that day, as well as her father’s state of mind.

Mr Trump’s former press secretary Stephanie Grisham has previously told the committee about “off-the-books” secret meetings before January and has provided the names of aides who may know the details.

The former president was dealt a blow by the Supreme Court on Wednesday when justices rejected his bid to block the release of White House documents about the riot in an 8-1 decision. Diaries, visitor logs, and other materials will no longer be kept confidential under executive privilege.

Donald Trump insists he “didn’t say anything wrong” on a phone call with Georgia’s top elections official in which the former president appeared to pressure him to “find” votes that would overturn Joe Biden’s definitive victory in the state.

Donald Trump has tried to twist President Joe Biden’s words to falsely argue that the 2020 election was fraudulent, despite having no evidence to support the repeated claims.

“President Biden admitted yesterday, in his own very different way, that the 2020 election may very well have been a fraud, which I know it was,” the former president said in a statement on 20 January, the anniversary of his last day in office. “I’m sure his representatives, who work so hard to make it look legit, are not happy.”

Gustaf Kilander in Washington, DC has the details.

Former President Donald Trump has released a statement through his spokesperson regarding his “perfect” call to the Secretary of State of Georgia following the 2020 election.

He continues to allege “massive voter fraud” and says that the Civil Special Grand Jury requested by Fulton County DA Fani Willis should instead focus on that and not his “perfect phone call” in which he tells Georgia’s Brad Raffensperger he needs to find 11,780 votes.

He signs off with: “No more political with hunts!”

Mr Hannity’s 7 January message laid out what Ms McEnany called a “playbook” for conversations with Mr Trump during his final days in office.

Trump says everyone wanted vaccine when he was president

In an interview last night, former President Donald Trump claimed that everyone wanted to be vaccinated against Covid-19 when he was president, but after Joe Biden came into office some people won’t get the vaccine because they do not trust him.

“As she publicly stated that day at 3:15pm, ‘any security breach or disrespect to our law enforcement is unacceptable. The violence must stop immediately. Please be peaceful.’”

The chief prosecutor in Fulton County, Georgia has requested a special grand jury as part of her investigation into Donald Trump’s attempts to overturn the state’s results in the 2020 presidential election.

Fulton County District Attorney Fani Willis, who launched her probe nearly one year ago, follows the former president’s phone call with Georgia’s Republican Secretary of State Brad Raffensperger, in which he appeared to pressure him to “find” votes that would overturn Joe Biden’s victory in the state.

Rep Bennie Thompson suggests an early February meeting for Ivanka Trump to be questioned by the Capitol riot select committee:

We would like to meet with you soon, but we also want to accommodate your schedule. We propose meeting with you on February 3 or 4, 2022. Please let us know whether one of those dates will fit with your schedule, or connect us with your counsel so we can coordinate on scheduling. If you are unavailable on those dates, we can arrange a time during the week of February 7, 2022.

The committee is also keen to ask Ms Trump about her father’s state of mind during this period and Sean Hannity’s efforts to stop the president from talking about a “stolen election”.

A text conversation between Mr Hannity and then-White House Press Secretary Kayeigh McEnany on the day after the Capitol riot is included in the letter. It lays out a five-point approach for conversations with the president.

The first item is “No more stolen election talk”, the second is “Yes, impeachment and 25th amendment are real, and many people will quit…”

Ms McEnany responds: “Love that. Thank you. That is the playbook. I will help reinforce…”

Prosecutors from New York Attorney General Letitia James’ office want to talk to Ivanka Trump about a Park Avenue apartment she leased from her family’s eponymous real estate company that was offered to her for purchase at a price far lower than the unit’s public valuation, court documents reveal.

In a motion asking a New York state judge to order Ms Trump to appear for a deposition with investigators from the attorney general’s office, the prosecutors allege she “obtained apparently extraordinarily favourable terms” for renting an apartment at the Trump Park Avenue condominium building, with her monthly payments at “a mere fraction” of what the general public would have paid.