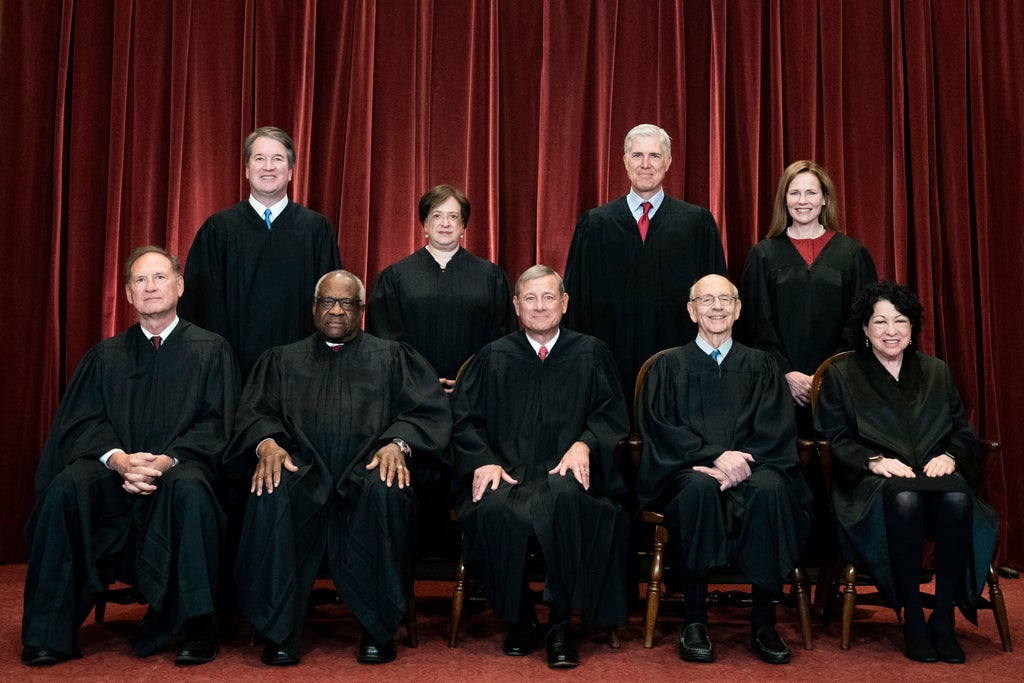 The Supreme Court voted 6-3 to toss out Joe Biden’s mandate for businesses requiring those with more than 100 workers to institute vaccination or regular testing requirements on Thursday.

The court allowed the administration’s requirement for healthcare workers to be vaccinated to remain in place, but the ruling is nevertheless a major blow to the plan the president announced last year.

In their majority opinion, the six justices wrote that although Covid-19 was indeed a hazard faced by many employees at their workplaces, it did not fall under the legal definition of an “occupational hazard” that OSHA, the US government agency which enforces labour standards, could regulate.

“Although Covid-19 is a risk that occurs in many workplaces, it is not an occupational hazard in most,” reads the Court’s ruling.

The justices went on to describe the virus as a “universal risk” that Americans also faced at home, at school, and in many other places of public gathering.

Their ruling chops away the largest part of the new, more aggressive anti-Covid strategy announced by the Biden administration last year. It was strongly opposed by Republicans, who near-universally oppose mandated vaccinations while being split on the issue of the vaccines themselves, with some wholeheartedly embracing the jabs and encouraging their followers to get vaccinated while others have spread misinformation in efforts to sow mistrust about the shots.

Mr Biden’s White House has faced a new wave of criticism from some of its own supporters in recent weeks amid the spread of Omicron, a new Covid-19 variant, across the US. That criticism has included anger over the availability of Covid-19 tests, particularly the at-home variety, as well as derision of a recent decision cutting the time period that businesses are recommended to give infected workers time to recover.

White House press secretary Jen Psaki addressed the ruling minutes after it was made public at her daily press briefing.

Mr Biden, she said, would call on businesses to “step up” and work to protect both their own workers and customers from Covid-19, presumably by instituting vaccination and testing requirements.

In a statement a short time later, the president said: “I am disappointed that the Supreme Court has chosen to block common-sense life-saving requirements for employees at large businesses that were grounded squarely in both science and the law. This emergency standard allowed employers to require vaccinations or to permit workers to refuse to be vaccinated, so long as they were tested once a week and wore a mask at work: a very modest burden.”

“We have to keep working together if we want to save lives, keep people working, and put this pandemic behind us,” Mr Biden continued.

In September, Mr Biden gave an impassioned speech recalling accounts of Covid victims’ remarks to doctors lamenting their decisions to refuse the vaccine while urging unvaccinated Americans to do what he portrayed as their patriotic duty: Get vaccinated, and get the booster shot as soon as possible.

At the same time, he enunciated the frustration that many Americans are feeling about the pandemic’s longevity and the continued effects it has on American public life.

“We’ve been patient, but our patience is wearing thin. And your refusal has cost all of us. So, please, do the right thing. But just don’t take it from me; listen to the voices of unvaccinated Americans who are lying in hospital beds, taking their final breaths, saying, ‘If only I had gotten vaccinated.’ ‘If only,’” said Mr Biden.

He added at the time: “It’s a tragedy. Please don’t let it become yours.”