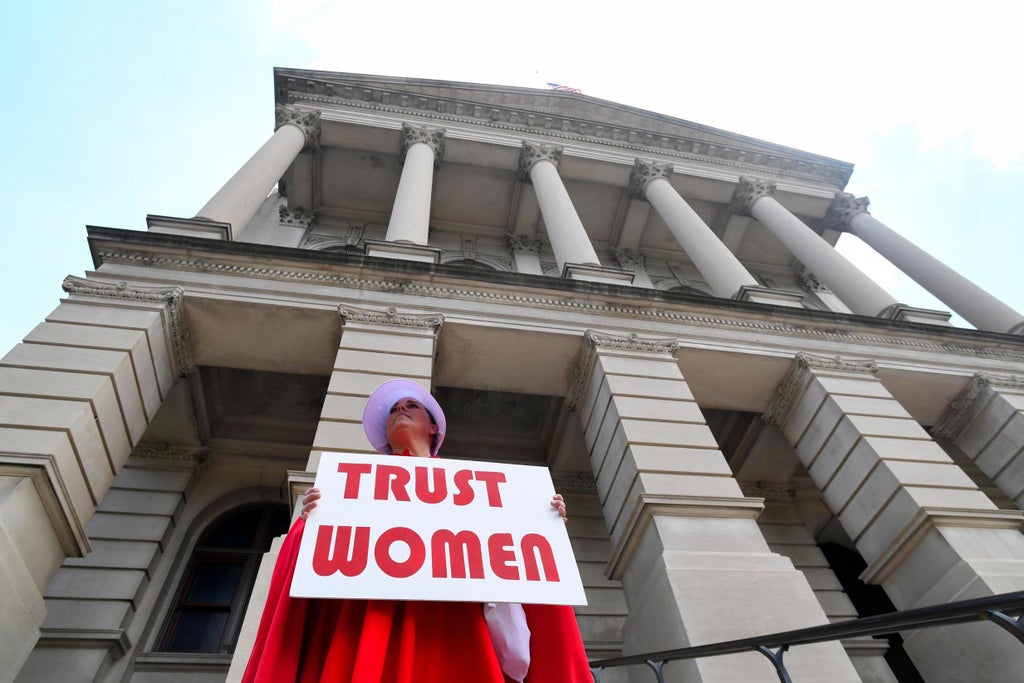 On the eve that Roe v Wade was decided on 22 January 1973, a case that would set the precedent for nearly half a century to protect a pregnant person’s choice to be granted access to an abortion, most religious groups in the United States were already in consensus on the matter. That is, they supported abortion reform, if not an outright repeal of the country’s restrictive laws.

“There was a broad consensus among Protestants and Jews, that abortion restrictions were immoral and damaging,” says historian of sexuality and religion Gillian Frank in an interview with The Independent. The groups, he explains, had come to realise, specifically in the two decades leading up to Roe, that the laws weren’t preventing the procedure from taking place, and their community members were dying as a result.

“The reality was this: religious folks understood that abortion laws were just creating dangerous situations,” the co-host of the podcast Sexing History explained. “And they saw it as their moral obligation to connect people with safe physicians.”

In the days since Monday night’s leaked draft of the Supreme Court opinion that seems to be paving the way for that historic 1973 ruling to be reversed, it once again seems that religious communities are the ones who will be taking up the cause of challenging the restrictive laws, in whatever small or big way they can.

From activist rabbis signing pledges to speak out about reproductive rights as leaders in their communities, to a Satanic Temple fighting for abortion rights in America’s Bible Belt, religious communities across the spectrum are flooding to the frontlines of the country’s fight for abortion rights. And, Dr Frank points out, that’s not a new trend.

In the historian’s forthcoming book with the University of North Carolina Press, Making the Choice Sacred: Liberal Religion and the Struggle for Abortion Before Roe, he discusses the work that clergy people did in the decades leading up to the historic Supreme Court case and helps debunk some of the misunderstood assumptions in the country then, like ones held now. Namely exposing the mistruth that all religious groups in the US were opposed to supporting women’s basic reproductive rights.

“They were very visible and they were unambiguous in the moral justifications and the moral rights of women to choose abortions no matter what their circumstances.”

He describes how in the decades before the Roe decision, a determined group of clergy people, composed of Protestant ministers and rabbis hailing from certain sects of Judaism, relied on their religious respectability and authority to tap in to their widespread connections to help women who found themselves unwillingly pregnant find doctors who would provide “sterile safe abortions”, both inside and outside the borders of their own country.

“They did this in an organised fashion, and helped hundreds of thousands of women find safe abortions,” he said, noting that the clergy would sometimes find themselves arranging travel for these community members to England, Mexico, Canada, Puerto Rico and even as far away as Japan.

One of the more active and officialised groups during that era was the Clergy Consultation Service on Abortion (CCS). Though they officially introduced themselves in 1967, Dr Frank notes that they were informally working for many years before.

“They would testify at hearings. They would advocate and lobby various politicians. They would agitate for law reform and law repeal,” he said, but more than that, they would also counsel and assist women seeking abortions find the right, and safe, practitioners.

Members of the CCS, then only 21 strong, provided their first public introduction of their services in an exclusive interview with The New York Times, landing themselves on the front page of the newspaper of record on 1 May 1967.

“Confronted with a difficult decision and means of implementing it, women today are forced by ignorance, misinformation and desperation into courses of action that require human concern on the part of religious leaders,” the group told The Times, adding that doctors who took on the women’s cases would not be regarded as “criminal but as living by the highest standards of religion and the Hippocratic oath”.

Forming out of the roots of the CCS, which largely dissolved after the ruling in Roe in 1973, was the Religious Coalition For Reproductive Choice, an interfaith organisation that nowadays supports women’s reproductive health and religious liberty.

The group, now headed by Rev Katey Zeh, supports people seeking abortions through counselling and supporting networks that fund travel for women unable to access the procedure in their state. At the federal and state level, they’ve filed briefs in key US Supreme Court cases, led rallies that oppose the appointment of anti-choice justices and have helped strike down the enactment of abortion bans in several states.

“People of faith have always made sure those who need access to abortion care can get it, and that is as true today as it has ever been,” said Ms Zeh in an interview with The Independent. “In preparing for this time, we have been in intentional conversation and discernment with faith partners and others who are leading this work on the ground. We have been asking ourselves, how can people of faith show up in the ways that are the most helpful and that fill a need that only they can address?”

One of the ways the group has been preparing for this fraught moment, which Ms Zeh admits does not come as a surprise and is one they’ve been strategising ahead of for “a long time”, is equipping faith leaders and activists with resources through the Religion and Repro Learning Center and directing folks to their Abortions Welcome site, which offers people seeking the procedure the practical and spiritual companionship they need before, during, and after abortion.

“The answers will look different, depending on where people are located geographically, but we are committed to ensuring that every person who needs access to abortion care is able to.”

By the numbers, support for abortion rights varies across different faiths, but when you begin drilling down into various sects, a clearer picture begins to emerge.

When you switch the lens to other faiths in the US, however, support for abortion becomes more robust.

According to a 2018 survey conducted by the Public Religion Research Institute, 69 per cent of Buddhists and 62 per cent of Hindus support abortion in all or some cases, while a small majority of Muslims, 51 per cent, supported the right.

In the same 2018 survey, Jewish adherents had the highest support for a woman’s right to abortion, with 70 per cent of respondents saying they’d support it in all or most cases.

And that support was reinforced this week when Jewish organisations and associations across the US, a country with approximately 7.6 million Jewish people, began issuing statements condemning the draft opinion.

“Jewish tradition cherishes the sanctity of life, including the potential of life during pregnancy, but does not believe that personhood and human rights begin with conception, but rather with birth as indicated by Exodus 21:22-23,” the Rabbinical Assembly, an international association of Conservative and Masorti rabbis, wrote in a statement.

Rabbi Danya Ruttenberg, who leads the National Council of Jewish Women’s “Rabbis for Repro”, is a fierce advocate for reproductive rights people and she, alongside several hundred others who have RSVP’d, intends to take that fight to the steps of the Supreme Court on 17 May with the Jewish Rally for Abortion Justice.

“The Jewish community is here and is ready and understands what’s at stake and is ready to show up,” Ms Ruttenberg, the scholar in residence at the NCJW, said in an interview with The Independent.

Limiting abortion by reversing Roe, she explains, reflects a Christian definition of when life begins and enshrines that view into law (in Judaism, conception does not mark the beginning of life and the faetus is considered part of the pregnant person’s body for the duration).

“Questions about when life begins, should not be relevant, that’s a theological question,” she said. “Different people answer that in different ways.” Within Judaism, she adds, abortion procedures are required if it means saving the life of a pregnant person.

“In some states, that would mean not being able to practice my religion.”

Because of this, she notes, she and advocates are “exploring” options to take their case of religious freedom to a higher court in an effort to challenge some of the country’s restrictive abortion laws but warns that those plans are not something that should be pursued “casually”.

“You want to make sure your strategy is watertight,” she said. “Because whatever approach you take, you wouldn’t want to have any unintended consequences that might set another precedent.”

Muslims in America similarly view the issue of abortion rights in the US as a religious freedom issue. Writing in a letter in December 2021, seven Muslim American organisations argued for opposing Mississippi’s strict abortion law, the case that ultimately triggered Monday night’s draft opinion to be penned.

“Not all American Christians, nor Americans of other religions, share this belief,” the group wrote. “Mississippi’s law not only compromises the Constitution’s protection of religious diversity among Americans, but also threatens an Islamic principle of honouring religious diversity.”

Aliza Kazmi, co-executive director of HEART and one of the letter’s co-signatories, wrote in an email to The Independent that she and her team were “shaken” upon hearing Monday’s news. But despite it falling over Eid, they went into strategy mode almost immediately.

“Before Monday, we created a broad plan to leverage our resources … Our goal is to develop clear and uplifting community outreach and political education that affirms what a majority of Muslims in America believe: that abortion should be legal in all or most cases,” she said. An email newsletter, she added, was fired off within hours of the leaked draft to keep the community up to date the recent news.

“We have connected with local advocates in states like Georgia, where we know that there is a high Muslim population and ongoing challenges to maintain reproductive justice,” she wrote while listing the specific groups they’ve partnered with in recent months, such as SisterSong, Catholic for Choice, and State Innovation Exchange.

The religious liberty argument has even been taken up by groups that, though upon first blush might not appear to be a theologian’s definition of a religion, according to the IRS website in fact are: The Satanic Temple.

The group is currently agitating against Texas’ restrictive abortion rules after the institution filed a February 2021 lawsuit against the state over regulations that require women seeking abortions to undergo a medical sonogram and a 24-hour wait period.

In the lawsuit, they argue that these stipulations violate the TST’s religious beliefs and central tenets of their faith.

“We expect that Texas will respect our claims to religious liberty and permit Satanists their religious exemptions from medically unnecessary and unscientific abortion procedures,” the TST wrote on their website about the case.

Though historian Dr Frank doesn’t wholly believe that the TST is the perfect representative for religious diversity, he does agree with the motivating cause behind their lawsuit. That is, religious freedom.

“First Amendment freedom of religion means freedom from religion, that not one religious doctrine should become the law of the land, whether it has to do with contraception, or abortion, or gay marriage,” Dr. Frank said. “For a long time, the loudest voices, the most visible voices have been religious voices that have opposed abortion. But they are not the only story.