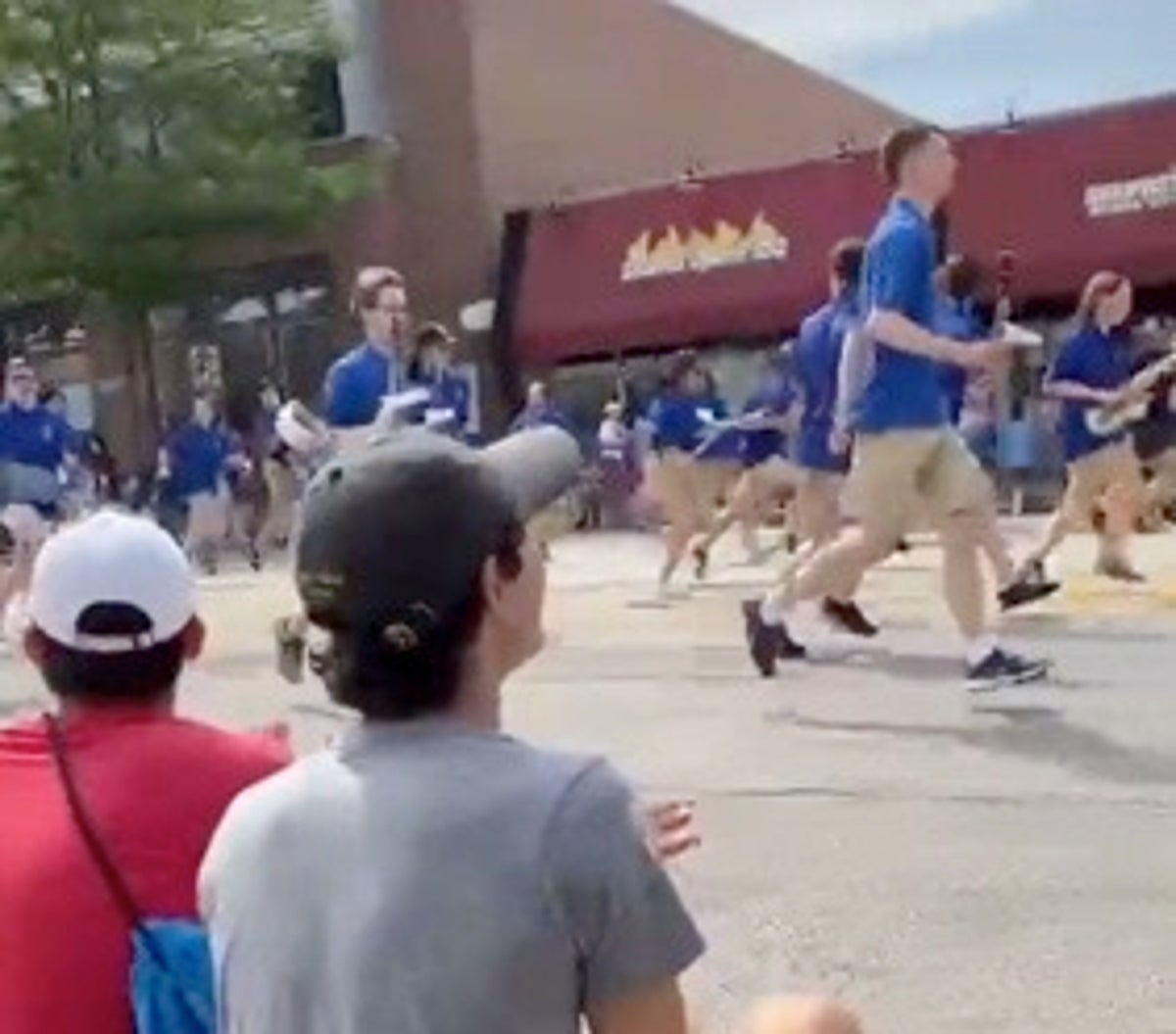 Five people have been killed and another 16 hospitalised in a mass shooting at a July 4 parade in Illinois with a manhunt now under way for the gunman who allegedly opened fire from a roof above the festivities.

Gunfire erupted at the Highland Park Fourth of July parade in downtown Highland Park around 10 minutes after the Independence Day celebrations kicked off at 10am on Monday morning, reported The Chicago Sun-Times.

Witnesses told WGN9 that the suspect was positioned on the roof of an Uncle Dan’s retail store and began firing into the parade below.

As of 12.30pm local time – more than two hours after the mass shooting unfolded – the incident remained “active” and the gunman was still at large.

City officials said in a press release that police were responding to an active shooting and urged members of the public to shelter in place.

Multiple law enforcement agencies are searching for the suspect and have secured a perimeter around downtown Highland Park.

Evidence of a firearm has been recovered from the area, the city said.

In total, 16 people were rushed to hospital with five victims so far confirmed dead.

As of 11.20am local time, the shooting was still “active” and members of the public were being urged to stay away from the area, according to Illinois State Police.

“The Illinois State Police is currently assisting Highland Park PD with an active shoot situation that occurred at the Highland Park Parade,” the agency said.

“The public is advised to avoid the area of Central Ave and 2nd St. in Highland Park.”

Law enforcement sources told WGN9 that two people were killed in the attack and multiple others were injured, though officials are yet to confirm the number of victims.

One person was covered by a blanket on the ground while at least five others were seen bloodied, reported The Chicago Sun-Times.

Rep Brad Schneider, who represents the area of Highland Park, said that he had heard there was “loss of life”.

The Democratic congressman tweeted that the shooting unfolded as he and his team were gathered at the start of the parade but confirmed that they were all unharmed.

“Today a shooter struck in Highland Park during the Independence Day parade. My campaign team and I were gathering at the start of the parade when the shooting started. My team and I are safe and secure. We are monitoring the situation closely and in touch with the Mayor,” he said.

“Hearing of loss of life and others injured. My condolences to the family and loved ones; my prayers for the injured and for my community; and my commitment to do everything I can to make our children, our towns, our nation safer. Enough is enough!”

“For those unaware, there was a shooting at the Highland Park Parade. I am ok but there have been multiple injuries.” he tweeted.

“Please stay out of the area, stay safe, and please pray for those injured.”

Footage posted on social media shows revellers and parade participants suddenly fleeing in panic as gunfire erupted in the streets.

In the TikTok video, which has been widely shared, families are seen sitting on the kerb of the sidewalk watching a marching band walk past.

Suddenly a voice starts yelling “gunshots” and the parade watchers start to leap up from the ground.

The marching band members break into a run and sprint off in the direction of the parade route.

Screams are heard in the background and people flee from the area as local residents who had come to enjoy the family-friendly Independence Day celebrations were forced to seek shelter.

One local resident told the Associated Press that she was riding a parade float when she saw people running away from the area.

The city of Highland Park confirmed on its Facebook page that police were responding to an “incident” in the area and that the festivities had been canceled.

“Highland Park Police are responding to an incident in downtown Highland Park. Fourth Fest has been canceled,” the message read.

Members of the public were urged to stay away from the downtown area.

Lake County Sheriff’s Office tweeted that it was assisting Highland Park Police with a shooting along the parade route.

“We are assisting Highland Park Police with a shooting in the area of the Independence Day parade route. STAY OUT OF THE AREA – allow law-enforcement and first responders to do their work,” the department said.

Highland Park is around 25 miles north of Chicago.

VIDEO : Racers aim to be a cut above the rest at annual lawnmower championships

Canelo Alvarez confident despite past defeats