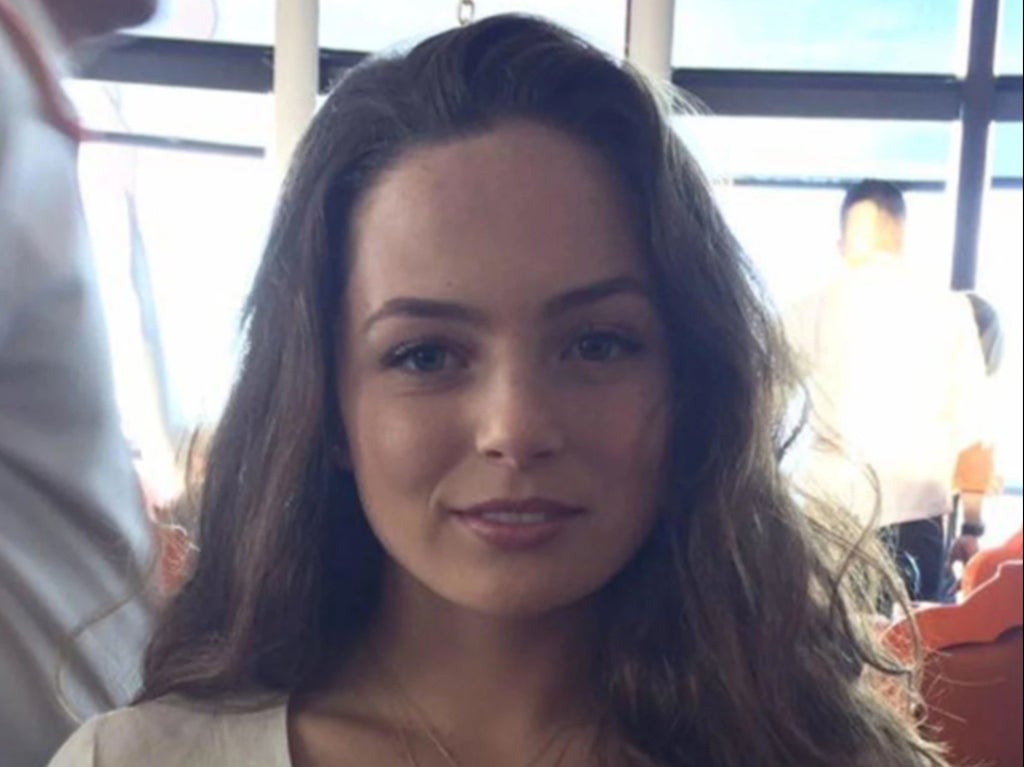 Neighbour of young woman stabbed to death in LA speaks out

Police have identified a man they believe to be the killer of 24-year-old Brianna Kupfer.

The Los Angeles Police Department said that the suspect, Shawn Laval Smith, 31, should be considered armed and dangerous.

A manhunt is underway for a suspect accused of stabbing 24-year-old Brianna Kupfer to death at the furniture store where she worked in Los Angeles.

Ms Kupfer, a graduate student at the University of California – Los Angeles, was alone on a shift at the Croft House showroom on 13 January when a masked man walked in and attacked her, police said. She was found bleeding out on the floor by a customer 20 minutes later and was pronounced dead at the scene.

Nearly a week later, the assailant, believed to be a homeless man, is still at large after surveillance video captured him leaving the shop through a back door and walking calmly down an alley.

In addition to a $50,000 reward from the city council, private donations for information relating to the capture of the suspect have now taken the total to in excess of $250,00.

Investigators said Ms Kupfer, who hailed from Pacific Palisades and worked as a design consultant for the high-end retailer, appeared to have been targeted at random.

Her heartbroken father, Todd Kupfer, spoke out about the tragedy on Monday and blamed politicians’ failure to curb surging crime in the city. On the same day, a soon-to-retire nurse was fatally attacked while waiting for a bus downtown.

The LAPD said that the suspect, Shawn Laval Smith, is believed to be using public transport.

In a community alert shared by the Los Angeles Police Department, they say that “special attention must be paid to bus stops and train platforms.”

On Tuesday, the police identified 31-year-old Smith as the suspect they believe stabbed Brianna Kupfer on 13 January and fled the scene.

Police said that Mr Smith should be considered “armed” and “dangerous.”

Police have identified a man they believe to be the killer of 24-year-old Brianna Kupfer.

The LAPD have released new images of the man suspected of killing UCLA grad student Brianna Kupfer and announced a reward for his capture had increased to $250,000.

A $50,000 reward put up by the city of Los Angeles had grown to $250,000 with donations from private groups and individuals, police revealed at a press conference on Tuesday.

Who is Brianna Kupfer?

Brianna Kupfer has been described by loved ones as a “kind soul” who “glowed with positivity”.

At the time of her death, the 24-year-old was seeking a graduate degree in architectural design at the University of California Los Angeles (UCLA).

She was also working as a design consultant at the Croft House upscale furniture boutique in Hancock Park in the west of Los Angeles where she was murdered on Thursday 13 January. She leaves behind her parents and three siblings.

A Los Angeles nurse is dead after a homeless person randomly attacked her at a bus stop, police say.

Sandra Shells, 70, was waiting for a bus at downtown LA’s Union Station on Thursday when an assailant allegedly hit her in the face, knocking her to the ground. A witness to the attack called 911.

“Upon arrival, officers discovered that the suspect, later identified as Kerry Bell, had struck the victim in the face, causing her to fall to the ground and sustain a fractured skull,” the LAPD said in a statement.

The father of UCLA student Brianna Kupfer who was fatally stabbed in a Los Angeles furniture store has hit out at politicians for failing to curb surging crime.

Talking to Fox News, the deceased woman’s father Todd Kupfer said: “Crime is truly spiking, and we have a lot of criminals on the streets that should not be out.”

Video: Suspect walks calmly away from store after killing

Police hunting for the killer of UCLA grad student Brianna Kupfer have released a new video of the suspect.

The murder of Ms Kupfer has shocked residents of the affluent Hancock Park neighbourhood.

Situated in the Wilshire area, it sits to the south of Hollywood and Melrose, and to the east of La Brea, approximately four miles west of Downtown Los Angeles.

Centrally-located to the neighbourhood is the Wilshire Country Club. Other nearby landmarks include the LaBrea Tar Pits and the Los Angeles County Museum of Art.

A sizeable portion of the area is zoned as historically important having been developed in the 1920s. A number of residences of consuls generals are within Hancock Park, including those of Canada, Japan, and the UK — where the Duke and Duchess of Cambridge stayed on a visit in 2011.

The neighbourhood is approximately 71 per cent White, 13 per cent Asian, eight per cent Hispanic or Latino, four per cent Black, and four per cent mixed race. An estimated 20 per cent of the population is Orthodox Jewish.

Nearby businesses to Croft House, where Ms Kupfer worked, include lighting and plumbing stores, various eateries, a Kosher market, and two Orthodox synagogues.

Grief and anger on social media over killing of UCLA student

The random killing of UCLA grad student Brianna Kupfer has led to an outpouring of grief and anger on social media as a police manhunt for the suspect reaches its fifth day.

City councilmember: ‘Deep sorrow and sadness … has engulfed us all’

The tragic murder of Brianna Kupfer in Hancock Park has shaken our community to its core. There are no words that can express the deep sorrow and sadness that has engulfed us all. My family’s prayers are with Brianna’s family and friends at this time, with my commitment and reassurance that we will find the perpetrator who committed this heinous act and bring him to justice.

My Director of Public Safety was on scene yesterday with LAPD Operations West Bureau Detectives and Wilshire Area Captain Sonia Monico. We are working closely with our law enforcement counterparts to assure they have every resource necessary. LAPD is aware of my full and unconditional support to bring the perpetrator to justice.