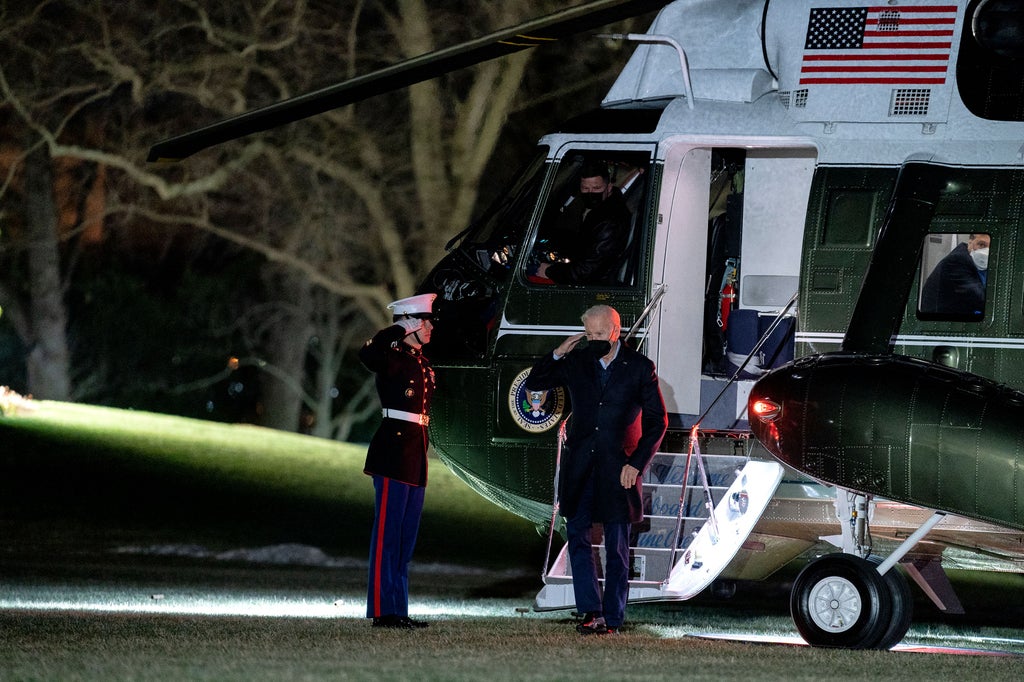 The White House is planning a Wednesday press conference for Joe Biden to promote his administration’s efforts to combat the Omicron surge and the greater availability of home testing kits.

The president will also announce a plan to distribute hundreds of millions of N95 masks for free to Americans, according to Politico.

The masks will reportedly come from the federal government’s stockpile of 737 million N95 masks in the Strategic National Stockpile, which have been sourced from 12 domestic manufacturers.

Last week Mr Biden acknowledged that for some Americans getting hold of high-quality masks was “not always affordable or convenient.”

Meanwhile, the House committee investigating the January 6 insurrection of the US Capitol has subpoenaed and obtained records of phone numbers linked to Eric Trump and Kimberly Guilfoyle, Donald Trump Jr’s fiancee, according to CNN.

It comes as additional subpoenas have been issued on Tuesday to other members of Donald Trump’s inner circle, including Rudy Giuliani, Jenna Ellis, Sidney Powell, and Boris Epshteyn.

Prosecutors in the Capitol riot case have reportedly asked at least one January 6 defendant about the involvement of Donald Trump in the attack, according to court papers and reports from The New York Times.

The papers were filed by a defense lawyer in the case of Brandon Straka, a former hair stylist who spoke at a pro-Trump rally in Washington the day before the Capitol was stormed.

In a memo, written by Mr Straka’s lawyer Bilal Essayli, a description was given about the interview Mr Straka had with prosecutors.

Mr Essayli reportedly noted: “the government was focused on establishing an organized conspiracy between defendant, President Donald J Trump, and allies of the former president to disrupt the joint session of Congress on January 6.”

Brandon Straka “answered all questions truthfully and denied the existence of any such plot”, the memo said.

President Joe Biden is to hold a press conference at the White House on Wednesday afternoon.

Scheduled for 4pm ET, this is Mr Biden’s first press conference of 2022.

The President will arrive in the East Room under pressure to set out how he has tackled the coronavirus pandemic and whether his administration’s renewed push for testing will prove effective.

Could Biden be about to bounce back?

Joe Biden’s poor approval ratings have sent many in his party into a state of abject gloom, with his numbers now approaching Trumpian lows. But as Politico’s Jack Shafer sees it, the president might be in for a comeback.

“This isn’t to suggest that Biden is about to become so popular that they’re going to break ground for his presidential memorial next week,” he writes. “But there’s most of a year before the 2022 elections, and nearly three years before Americans vote for president again — and two big things have sorted themselves out over the last couple of weeks that could play to the president’s political advantage over the long haul.”

The Biden administration has launched a website for Americans to order free at-home Covid-19 tests.

More than a million visitors were ordering the tests at one point on Tuesday evening. The launch went ahead earlier than announced, with President Biden’s press secretary saying that the site had begun taking orders during a “beta testing phase”.

The White House is also expected to announce on Wednesday that it is making 400 million N95 masks available for free at community health centres and pharmacies.

Four pages of White House records that Donald Trump has tried to shield from the 6 January House select committee by asserting privilege could soon be released.

The House committee investigating the 6 January insurrection at the US Capitol has subpoenaed and obtained records of phone numbers linked to Eric Trump and American television personality Kimberly Guilfoyle, who is also the fiancee of Donald Trump Jr, according to a report.

Both were part of the rally at Ellipse and addressed a crowd before the mob stormed the Capitol.

DeSantis could be ‘far more dangerous’ than Trump

Ron DeSantis would be “far more dangerous” than Donald Trump as the leader of the MAGA wing of the party, former US Republican lawmaker David Jolly says.

In an interview with MSNBC on Tuesday, Mr Jolly described relations between Mr Trump and Mr DeSantis as “icy” as speculation continues of a widening rift between the two Republican politicians.

“Ron DeSantis was an early spokesperson for Trump on Fox News, not because he supported Trump, but because he wanted to be the frontrunner for the governorship.”

He also accused the Florida governor of using Mr Trump “to get to Tallahassee”.

“Ron DeSantis is far more dangerous than Donald Trump because he’s more savvy, he’s more coy, and he doesn’t have the pitfalls that Donald Trump does,” Mr Jolly said.

“For more than two years, the Trump Organization has used delay tactics and litigation in an attempt to thwart a legitimate investigation into its financial dealings,” said Ms James.

“Thus far in our investigation, we have uncovered significant evidence that suggests Donald J Trump and the Trump Organization falsely and fraudulently valued multiple assets and misrepresented those values to financial institutions for economic benefit.”

She said the former president must comply with lawful subpoenas for documents and testimony because “no one in this country can pick and choose if and how the law applies to them.”

The statement noted that the evidence has been found that the Trump Organization intentionally used wrong property valuations “to obtain a host of economic benefits, including loans, insurance coverage, and tax deductions.”

Scheduled for 4pm ET on Wednesday, this is Mr Biden’s first press conference of 2022 and will occur on the eve of the anniversary of his inauguration.

White House press secretary Jen Psaki made the announcement on Friday, saying: “The president looks forward to speaking directly to the American people.”