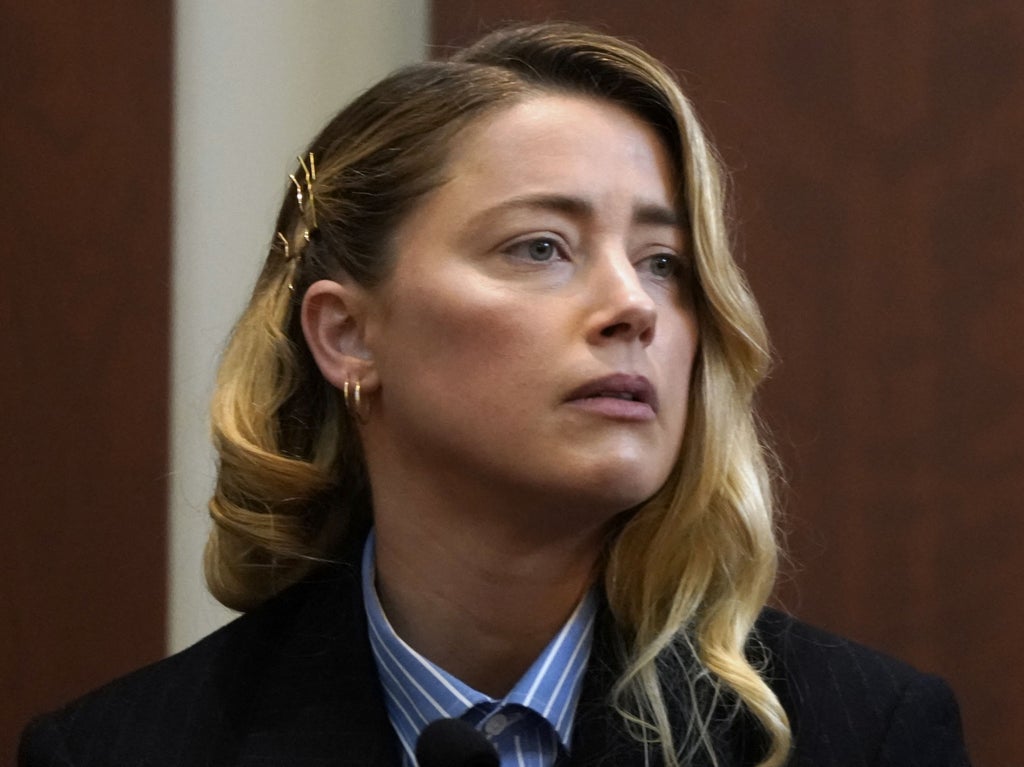 Amber Heard says the defamation trial opposing her and her ex-husband Johnny Depp is “the most painful thing” she has ever experienced.

Ms Heard took the stand on Wednesday (4 May) after being called as a witness by her own team.

Asked by her attorney Elaine Bredehoft why she was at the Fairfax County Courthouse in Virginia, Ms Heard replied: “I am here because my ex-husband is suing me for an op-ed I wrote.”

“How do you feel about that?” Ms Bredehoft asked.

“I struggle to find the words to describe how painful this is,” Ms Heard replied.

“This is horrible for me, to sit here for weeks and relive everything – hear people that I knew, some well, some not, my ex-husband with whom I shared a life, speak about our lives in the way that they have. This is the most painful and difficult thing I have ever gone through for sure.”

Ms Bredehoft then asked Ms Heard to describe her experience testifying as a witness in the 2020 trial which opposed Mr Depp and The Sun in the UK.

“I had to write – I think I gave seven witness statements under oath,” Ms Heard replied. “I sat on the stand for four days, under mostly cross-examination. And up until this point, it was the hardest I’d ever had to do.”

A judge in the UK case ruled against Mr Depp in November 2020.

Ms Heard was sued by Mr Depp in 2019 for alleged defamation over an op-ed she wrote in The Washington Post in late 2018. Mr Depp is not named in the piece, but Ms Heard describes herself in it as “a public figure representing domestic abuse”.

Mr Depp has asked for $50m in damages.

Ms Heard has countersued Mr Depp, accusing him of allegedly orchestrating a “smear campaign” against her and describing his own lawsuit as a continuation of “abuse and harassment.”

She has asked for $100m in damages and immunity against Mr Depp’s allegations.

Elsewhere in her testimony, Ms Heard described how she says Mr Depp wooed her and her family early in their relationship. She says Mr Depp lavished her with gifts and attention and got along with her parents, to the point that “I think my dad would have married him himself if I hadn’t.”

Mr Depp, she alleged, had a pattern of disappearing and returning “different”. She said she felt compelled to stop talking about auditions she attended as an actor “because it would change the mood so dramatically”.

She alleged Mr Depp would make comments about her wardrobe, and recounted what she described as “a blow-up”.

“At first, it was just he’d throw something, smash some things,” she said. “He loves to smash up a place, an apartment, furniture. That’s what it started with, a glass. He threw a glass at me. I remember, it was summer. And he just threw this glass across the kitchen. It didn’t hit me. It shattered behind me, and I remember thinking that it very easily could have hit me.”

Ms Heard alleged Mr Depp would use disparaging language with her, calling her a “whore”, adding: “It didn’t start with using the ‘whore’ word, it was just comments, until it would escalate”.

“You know, like, when I’m standing there, you know, just hit the wall, screaming at me,” she added.

“Then he would disappear and get clean and sober, and he’d come back and tell me that he was done drinking, he was over it, it was done, he’d cleaned himself up, he had done it before and he would do it again. And then he would go back to this wonderful, almost unreal – real, but unbelievably nice, sensitive, kind, warm, generous, interesting, funny man that I loved.

“And he would make me feel so loved. I would feel so distant from that thing that was so scary that I would not even recognize it. That was how our relationship kind of started developing that first year.”

Asked to recount the first time Mr Depp allegedly hit her, Ms Heard said: “It’s seemingly so stupid, so insignificant. I will never forget it. It changed my life.”

She alleged she and Mr Depp were “sitting on the couch”, “talking”, “having a normal conversation”.

“There was no fighting, no argument, nothing,” she said. “He was drinking and I didn’t realize at the time but I think he was using cocaine because there was a jar – a jar of cocaine on the table.”

She said she asked Mr Depp about a tattoo on his arm.

“And I laughed. I laughed because I didn’t know what else to do. I thought, ‘This must be a joke. This must be a joke.’ I didn’t know what was going on. I just stared at him, kind of laughing still, thinking that he was going to start laughing too to tell me it was a joke, but he didn’t. He said, ‘You think it’s so funny? You think it’s funny, b****? You think you’re a funny b****?’ And he slapped me again. I was clear it wasn’t a joke anymore.”